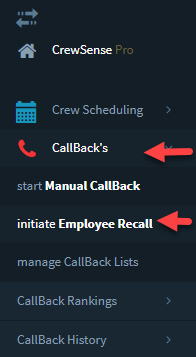 Indicate the number of employees needed and from which list you would like to hire from. You have the option of selecting multiple employees from across multiple lists. Other options within this module include the opportunity to filter among groups and classifications, as well as including/excluding employees. Employees who are already working for the desired time will automatically be excluded.
Finally, you can compost a text message the employees will see when notified. Once a wait time has been selected, click Start Recall to begin. You will be asked to confirm the recall and start.
The Recall status page will allow you to view the employees that have been contacted, will be contacted and their respective contact statuses. From this screen, you also have the opportunity to designate an end time to the shift for which you are recalling for. Note: the default shift start time is the time in which the Employee Recall was started.

To cancel an active recall, simply click the red 'x' at the top right of the screen.
Accepted employees will populate into an Emergency CallBack assignment on the CrewScheduler:

From here, you have the opportunity to "drag and drop" an employee that's been called back to any assignment on the CrewScheduler. You may also choose to amend their shift from here as well.