The Dashboard, similar to the Assistant, is where all Callbacks will be managed. From here, you'll be able to create your force hire lists, rules, and approaches, lists as well as seeing both your callback history and list ranking. The power of building and creating the rules on how your callbacks work in the hands of the administration. 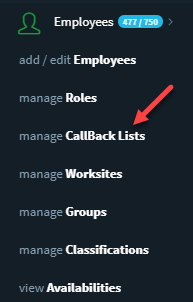 Building Approaches
This article will walk you through building approaches.

Building Rules
This link will walk you through building rules.

Ranking
Ranking will be different now, based on the approaches and rules. You can learn more about ranking here.

Callbacks
Callbacks will operate differently within the new module. You can find out more information about that in this article.