This method currently only works with the Rules Builder
The force hire module allows you to use the callback ranking to create a similar ranking system within the Callback system.

To use hours in Force Hire Ranking
First, you'll want to go to Admin > Work Types. You will see a new option that will allow you to 'Include Hours In Force Hire Ranking'. You will want to remember that any hours, both on the scheduler and done via callbacks, will be included into the force hire ranking with this setting on. You can keep them separate if you do not want all callback hours to apply to force hire ranking. Creating a specific work code solely for force hire hours is the best way to accomplish this. 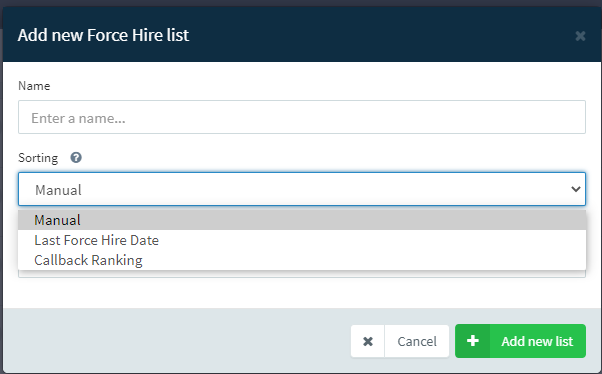 Once you select Callback Ranking, you'll be able to select the rule and the approach that you want to use for the list ranking. 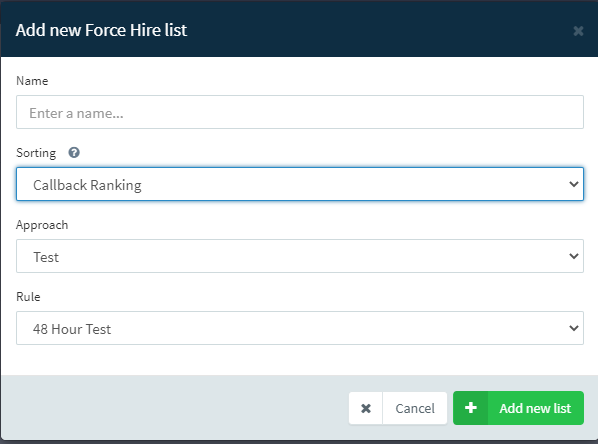 Once you add the new list, you'll notice that the ranking within the list matches your current ranking. Remember that if you do not include the hours from your callback ranking also into your force hire, the list will rank them based on your callback settings. The system will only use hours that are included in force hire ranking, so you'll want to make sure that is correct when you create the list.

Turning this on and off will augment your hours based on the setting. You can expect to turn the hours on and off and see a change. These hours will only account for those within your approach-- if you reset your ranking every year, the force hire module will also reset at that time.